skip to main | skip to sidebar

A Journal of chimeras (brief postings that vanish)

Smithsonian on the Egyptian pyramids

Posted by Doc Stardust at 8:39 PM No comments:

Posted by Doc Stardust at 11:24 AM No comments:

An hour of twenties music
https://www.youtube.com/watch?v=YYNEJITxi2Y

A good look at the "Other Half" - Rosalind Russel in "Auntie Mame"
Jeanne Toussaint
https://www.cartier.com/en-us/maison/l-odyssee-de-cartier/jeanne-toussaint.html
What the English language pages don't tell you about Jeanne Toussaint
https://fr.wikipedia.org/wiki/Jeanne_Toussaint
Debutante practice for presentation to queen
https://www.youtube.com/watch?v=hgEeHvzJ2Bw
The Sloaney (luxury lifestyle magazine)
https://www.thesloaney.com/
Listverse:  the wildest parties in history:
https://listverse.com/2014/02/02/10-of-the-wildest-parties-in-history/
Graphic Novel - Lackadaisy (which will also be an animated short film)
https://lackadaisycats.com/
(page 1 of the comic; https://lackadaisycats.com/comic.php?comicid=1)
Oheka Castle - the second largest private home (now a hotel) in the US
https://en.wikipedia.org/wiki/Oheka_Castle
Posted by Doc Stardust at 10:40 AM No comments:

Some of the fun things to explore today!

A simple fruit shrub (fruit vinegar for drinking) - there are lots of recipes, some of them take months to make.  This one doesn't.
https://www.myrecipes.com/how-to/how-to-make-shrub

Or how about "water pie"
https://www.southernplate.com/water-pie-recipe-from-the-great-depression/

Because things are just so strange this year - a collection of odd news stories that made people ask:

The ship's Internet turned out to be too unreliable to upload posts, which means that I will be uploading various posts and notes later this week.  I burned up ALL of my International data usage (not hard to do when you're the Geek Princess) and was left with the occasional small bits of free Internet via the ship's satellite.  It was slow... almost as slow as some of the fast modems of 30 years ago.

So here we are, back in Cairo, at the Mena House Hotel.  It's just after sunset, and that's Khafre's pyramid sitting on the plateau behind us, dividing the dark land from the indigo sky.  We can't see the Sphinx from here, but I know it's watching us.  The hotel sound system is playing classical music with an oriental theme.  I can't identify either the piece or the composer, but it's a violin arabesque that flits and echoes around the walls of the 2nd floor lobby balcony where I'm sitting and typing. 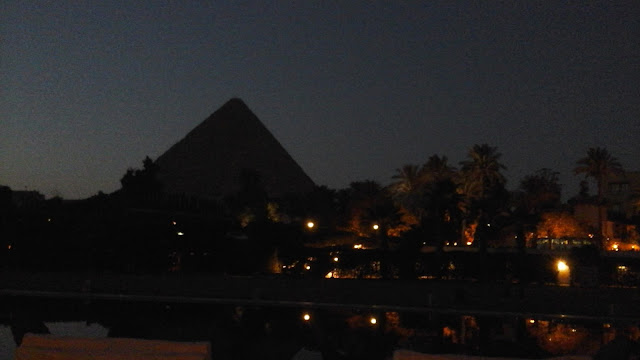 The grounds of the hotel are green and lush - there's several pools and the walks are lined with flowering plants.  Big fat bumblebees stumble and buzz contentedly here, and I saw the familiar pale green-white of a cabbage butterfly ghosting across the lawn.  You can even see the occasional scarab beetle, looking just like a piece of jewelry, trundling along on its way to an unknown destination.   There's not much traffic this weekend -- it's a four-day weekend here in Egypt and everyone who can has gone out of town.  The hotel grounds are quiet and fairly cool, although the temperature is hovering at 100.

The hotel, like all hotels and public places, has guards (discretely armed) who control the gates as fiercely as any guardian in the ancient books called The Book of Gates.  We don't feel threatened here -- the sense is that since military service is compulsory for young men, that they have to be given something to do while in the military, and keeping the flocks of trinket-sellers away from tourist hotels is one of the things that they do.  More about that later.

Night has fallen while I was writing this blog and downloading my homework from the University of Manchester.  I need to go back to the room and dress for dinner, leaving Khafre's "mansion of millions of years" to watch the brilliant night skies for me.
Posted by Doc Stardust at 9:01 AM No comments:

I spent six months trying to learn Arabic (fairly unsuccessfully), but I've been using the few phrases and words that I learned on everyone.  I'm trying to learn (or re-learn) a new one every day.  Sadly, one of the necessary phrases is "get away from me" - every charm seller and trinket seller along the Nile is desperate to see tourist money, and some of them get rude and aggressive and won't take "no."  There were two women today who managed to irk many of us.  They sold scarves, and the "hook" was "by women, for women, won't you support a sister?"  They wanted to sell as many as they could, so they got impatient with some of the women who were trying to buy (they wanted to make a 3 second sale and then run to "hassle" (that's what the Egyptians call it) another woman.)  I would have bought a scarf on the way back but their aggressive approach turned me off.

The ship itself has a little store with a vendor who will haggle for prices.  He lets you come in (really, you're a captive audience since you're on the ship and he's there, too) and look and ask questions.  Our tour guide mentioned him, and Bruce bought a gabeyaah (man's robe) from him.  I've gone in to look at things, and others have also bought from him.  Those of us on the tour understand that these little vendors are eager to sell and do need the income, but when they flock around you and won't take "no" for an answer, it's off-putting.

Bruce has acquired souvenirs, including the now-famous "one eared cat."  Someone bought a large-ish (1 foot tall) statue of Bast, but when they tucked it in their bag, it knocked against something and lost an ear.  The husband and wife were on the bus with Bruce (I think I was off climbing around a pyramid at the time) and the husband held it up and in best vendor manner called, "I have nice cat for sale!  Only one dollah!"

Bruce yelled "20 cents!"  ... and ended up with the one-eared cat, which he gave to me (I think we may need another suitcase!)  He added "buyer of one-eared cats" to his self-inflicted persona name on his name tag (he calls himself "Abu Abyad' (Grandfather White))

I have also acquired souvenirs... mine are more expensive.  I have a silver amulet of Sekhmet, who wards off plagues, and a book by Hawass that's basically a catalog of items on display in the Cairo Museum (which I can excuse as a book for my classes.)

Posted by Doc Stardust at 1:40 PM No comments:

A chimerical blog. Things will appear for only a brief time.